Emil Toonen’s work could be a slow process. First objects have to be sighted, (they are not on the shelf), then pondered, possibly allied with others, and then ultimately coaxed into being – this requires serendipity, an eye, contemplation, awareness of the nature and capability of materials, a feel for weird combinations and finally there is the making, or shaping, of a ‘work’. Many of Toonen’s objects do ‘work’ – they blink, whirl, spin, nod and make you laugh.

Toonen’s thinking is wry and his media exceptionally various. Since he grew up in the Strzelecki Ranges in south east Victoria – mirror location to the volcanic grassy plains and salt lake area of south west Victoria – could it be, that accustomed to the natural environment, his eye responds with greater alacrity, analysis and wit to the ‘unnatural’. That rather than ‘bin it’ he pokes and prods ‘waste’ to see what it’s worth, what it gives up, where it sits in his firmament of senses, sentiment and response. Politics are not free of his estimation either. 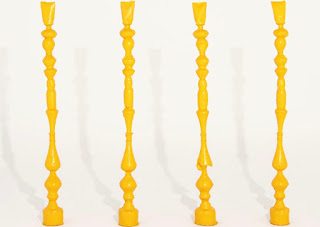 There has long been an Australian sculptural school that thrives on the found – Robert Klippel and Rosalie Gascoigne, come to mind – their work usually with a focus on a particular material. Toonen upends that safety somehow, (developing Duchamp, a Fountain that moves?) It is as though he refuses to accept the staus quo: this is not that, it could be this, think about it, play with it, let it play with you … Toonen describes himself as ‘a Melbourne-based artist working with the manipulation of consumer detritus for creatively liberating outcomes’.

Toonen’s fun is deceptive, to this writer’s mind. It blinks at darker matter, while making us laugh (uncomfortably?) in recognition. 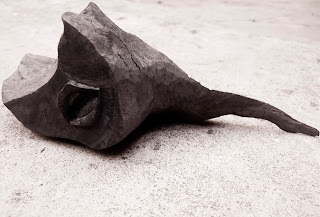 In no particular order, a list of some works might illustrate the complexities Toonen brings play:
Ski Table, (2013), 930x1290x380mm
Skis, plywood, paper pulp

Of his recent political observations made palpable  –  a row of white pickets bearing prime ministerial portraits Argh, 2015 (ongoing)  –  Toonen makes the comment: By combining … portraits of Australian prime ministers the piece becomes charged and open to interpretation: is this a comment on keeping out ‘boat people’? Are those hats some kind of cult regalia or is this a row of laughing clowns? Or conversely is it a feeble nationalistic embellishment to accompany a house flying the flag? The title Argh an acronym from Abbott, Rudd, Gillard and Howard steers the reading towards a expression of anguish with the state of recent Australian politics.
Artist concern regarding current politics is burgeoning - it is not hard to imagine why. For another example see Ben Quilty's soon to open show at Tolarno, The Stain.          AS
Posted by WINDOWSPACE-BEEAC at 03:42